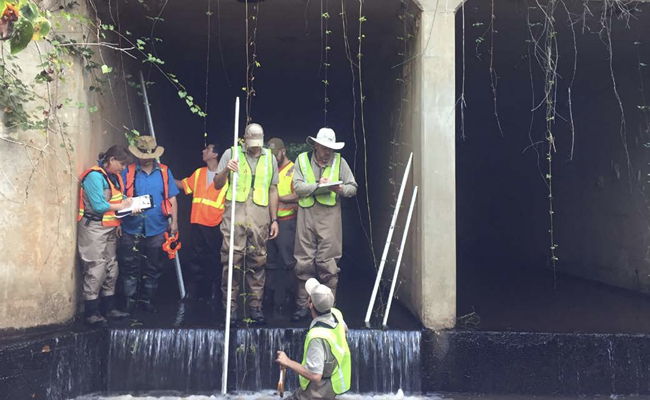 As you drive the winding roads of Georgia, it’s a common occurrence to sail over a culvert or bridge and get a brief glimpse of a stream burbling away into the overgrowth before you’re whisked on to new views.

These intersections of infrastructure and nature are so commonplace that we hardly think about them. However, they have important implications for imperiled wildlife and public safety.

The Georgia Aquatic Connectivity Team just released a new version of a handbook, Stream Crossings in Georgia: A Handbook for Connectivity and Resilience, which provides guidance on how to improve poorly designed and undersized steam-crossings to improve water quality, stream habitat, and public safety.

“A badly designed or failing stream culvert is both a safety hazard and a cause of aquatic habitat degradation,” said Seth Wenger, director of science for UGA's River Basin Center and a contributor to the handbook. “Poor road crossings also block the movement of fish, which fragments populations and makes species less resilient to other stressors.”

In addition to his role with the River Basin Center, Wenger is a member of the Institute for Resilient Infrastructure Systems, a multidisciplinary research center housed in UGA's College of Engineering.

The Southeast is home to an unparalleled diversity of aquatic species, and its streams and rivers are known for their beauty and recreational value. Poor road crossings are among the most widespread threats to these systems. The authors hope that this manual will provide guidance for local governments and other agencies responsible for maintaining, replacing, and constructing new culverts and bridges.

“We’ve learned a lot in the past 10 years about how to build road crossings that are good for streams, safe for people, and affordable to construct.” Wenger continued. “This updated manual reflects the current understanding and makes it accessible to everybody.”