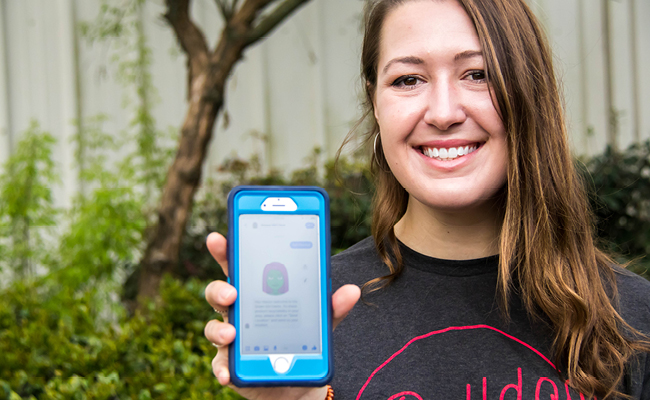 It’s a simple question people ask themselves every day – can I recycle this? A University of Georgia graduate and her team of engineers hopes to provide the answers for everyone.

Katherine Shayne (BSEE '16, MSEE ’18) has developed a system to educate consumers on what can or cannot by recycled in their area and how to do it properly. Can I Recycle This (CIRT) aims to provide prompt localized answers to specific recycling questions.

“We created a way for consumers to find out easily about the end of life of their products through social media and artificial intelligence,” Shayne said. “You can take a picture of anything you have a question about, send it to us on Facebook, Twitter or ask Amazon Alexa and we can give you an immediate response based on where you are.”

For example, if you send a picture of a Coca-Cola bottle and your location to @CanIRecycleThis on Twitter, the system will process the item within its database. To someone in Athens-Clarke County the response would be yes, it can be recycled in Athens – empty and with the cap screwed on. A Lay’s potato chip bag? No, because it’s actually a mixed material. An Edy’s ice cream container? Not recyclable. Starbuck’s plastic drink cup and lid? Recyclable.

Shayne’s team is also developing a self-contained app that can answer these questions without using social media. The problem is getting people to commit finite space on their smart phones to download another app.

All of the platforms are branded with a “Green Girl” avatar and the simple question – Can I Recycle This?

“We want people to identify with the brand so if they ever think they don’t know what to do with this item, they instantly think ‘Can I Recycle This?’” Shayne said. “It’s something you remember hopefully and go directly to when you have a question about something.”

Shayne concentrated much of her studies and her graduate thesis on the end of life for materials, particularly ocean-bound plastics. Her advisor was Jenna Jambeck, an associate professor in the College of Engineering who is internationally recognized for her research on plastic waste in the ocean.

One finding by Jambeck became the Royal Statistical Society’s International Statistic of the Year in 2018 – 90.5 percent of plastic is NOT recycled.

“We hope to decrease that number but increase the rate of recycling in the U.S. and hopefully switch some of those people who have been frustrated or are the non-believers,” Shayne said. “Not just preaching to the choir but a different demographic of people who with easier to find and better information will start recycling again or do it better.”

It's a complicated problem even people in the industry don’t fully grasp. Shayne and Jambeck visited one social media company’s headquarters in Los Angeles and met with its sustainability team. They spread trash across the table and asked them what was or was not recyclable in L.A.

“It is really exciting to see ideas from our research group be put into practice as a company and to have a former student be so successful at running it,” Jambeck said.

Shayne’s venture takes aim at a major hurdle in recycling – contamination. In single-stream recycling, where materials from glass to aluminum to paper to plastic are all deposited in the same bin and later sorted at a materials reclamation facility (MRF), the national average for contamination is between 20 and 25 percent.

“What we encounter is a lot of ‘wish-cycling,’” Shayne said. “People think, ‘This is probably recyclable; I’ll put it in the recycling bin.’ A lot of the time that causes contamination. That costs cities money because when something is contaminated it has to be taken to landfills. Landfilling something is the most expensive thing you can do.”

Contamination might include mixed materials like potato chip bags, which are made using layers of plastic and aluminum for which there is no process to separate. Containers can be contaminated by food products left in the packaging, allowing mold to grow. Other problems are “tranglers” like hoses, plastic bags or six-pack rings, which get tangled in the recycling machinery. Styrofoam becomes fragmented and contaminates various recycling streams.

“Contamination of recycled materials are such a significant economic and logistical issue for communities,” said Jambeck, a co-founder and majority owner of CIRT. “While we need upstream design changes of products and packaging to make it easier to recycle overall, because of the variability of what can or can’t be recycled in communities, it is so important to be able to get the current answer to this question in the easiest way possible – through platforms everyone is already using on their phones.”

“Because there’s so much contamination in the bales of recyclables, China enacted national policies to make contamination percentage so low there’s just no way in our current recycling system we can meet that,” Shayne said.

A recent UGA study – authored by another Jambeck student, Amy Brooks – estimated that China’s shutdown on imported recyclables will leave the world with 111 million metric tons of trash by 2030. That makes it imperative to reduce contamination and make recycling more viable and sustainable.

“Recycling is heavy on consumer input of materials, and them understanding where their waste ends up,” Shayne said. “People want to recycle but they don’t know how. And it differs for every location.”

Another aspect of the company is partnering with online marketplaces to provide comprehensive recycling information on its packaging.

“When you order something online and get that package, what do you do with it?” Shayne said. “Not just the packaging, but the product inside and its packaging. We are working on having this information available for online shoppers. Whether that be directly on the receipt or on the arrival email - based on where it’s shipped - what to recycle, compost or landfill.”

Kevin Kirsche, the director of UGA’s Office of Sustainability, believes CIRT can become an significant resource.

CIRT is partnering with communities such as Athens-Clarke County, Onslow, N.C., Orlando and major cities on the west coast to create an extensive database and artificial intelligence to provide immediate and accurate answers to citizens in those communities. The goal is to use education to reduce contamination that costs cities money when they have to take it to landfills.

“That’s our hope, to see more material diverted from landfills,” Shayne said. “But we want to see that those materials are the right ones and that they’re clean and they have value. Plastics are durable, last for we-don’t-even-know-how long and they should not be used one time and thrown away. Focusing on their circularity, they should be recycled back into the system for future use and reuse.”