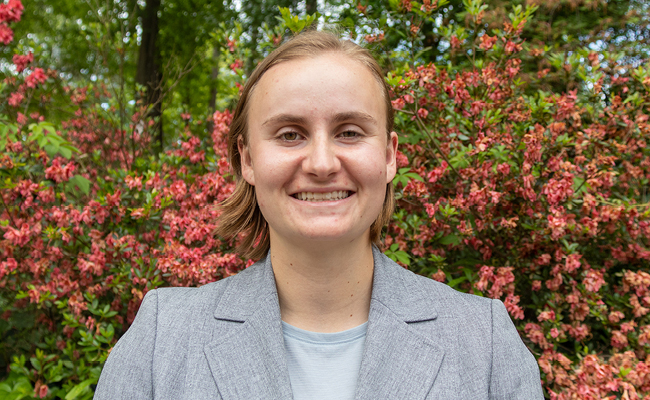 After graduating in May 2021 with a degree in agricultural engineering, Catherine Ginn plans to put her problem-solving and leadership skills to work as a pilot in the United States Air Force. Fittingly, Ginn learned of her nomination for the Arnton Clegg Award for Academic Excellence in Agricultural Engineering while performing evaluations for her Air Force flight physical at Wright Patterson Air Force Base in Ohio.

Ginn has been an active member of the University of Georgia community thoughout her time in Athens. In addition to carrying an impressive GPA in engineering, she served in leadership roles with the UGA Club Equestrian Team, her residence hall association, and the Delta Phi Epsilon sorority. Ginn also served as squadron commander of the UGA Air Force ROTC program's Arnold Air Society, an honorary service organization that focuses on professional development and leadership.

"Every student experiences trials throughout their journey, but I firmly believe my journey has given me the tools to be successful in any career I choose, and I surely hope to continue on my pathway to becoming an Air Force pilot," said Ginn. "Resilience, realistic optimism, and trust in people will be my guiding qualities to keep me moving forward."