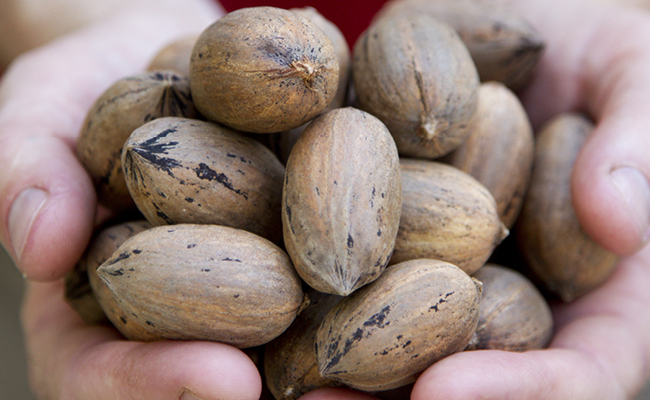 Researchers at the University of Georgia College of Engineering are trying to crack a tough problem: extracting more high-quality meat from shelled pecans.

Getting pecan meat from the nut to your holiday pies and other dishes is a complicated process. Current shelling techniques tend to crack the nut through either a drum or plates that apply a compressive force. While the process is designed to extract intact pecan halves, these valuable pieces typically make up only 48% of the meat collected. The remaining smaller pieces are worth half as much to producers and some is unusable.

“Typically, 4 – 6% of all pecan meat is unusable either because it is too small or it was damaged in the shelling process,” said Jaime Camelio, a professor in the College of Engineering and the project’s principal investigator. “In the pecan world, this equates to 15-million pounds of pecans every year that are thrown away. We see similar figures in other agricultural industries and we can’t throw away food like this.”

With a $550,000 grant from the U.S. Department of Agriculture (USDA), the UGA researchers will take a crack at helping pecan producers improve the yield of their crop. The team’s goal is to identify the factors and variables controlling meat extraction and provide solutions for increasing half extractions.

In the short-term, the researchers will look for specific ways to improve the mechanics of the shelling process. The fracture mechanics of shelling is not well understood and the variables surrounding the process are not thoroughly defined. This research has an opportunity to formalize how fracturing should take place and the variables controlling the why.

The researchers also will identify long-term opportunities to improve the overall pecan production process by introducing advanced manufacturing techniques adopted by other industries: digitization, the Internet of Things, and machine learning.

For example, the researchers believe real-time monitoring could improve shelling by providing producers real-time feedback on the quality of their production line’s output. Currently, it takes 24 hours for producers to determine the percentage of pecan halves rolling off their lines.

Pecans are farmed in 15 states, with annual production topping 300 million pounds. The United States is the world’s leading producer of pecans, and Georgia is historically the leading pecan-producing state. In 2020, Georgia’s in-shell pecan production totaled 142 million pounds, accounting for 47% of total U.S. pecan production, according to the USDA’s National Agricultural Statistics Service.

Throughout the project, the UGA researchers will collaborate with the National Pecan Shellers Association and two pecan operations in Georgia: Sunnyland Farms near Albany and South Georgia Pecan Company in Valdosta, the largest pecan processor in the U.S.