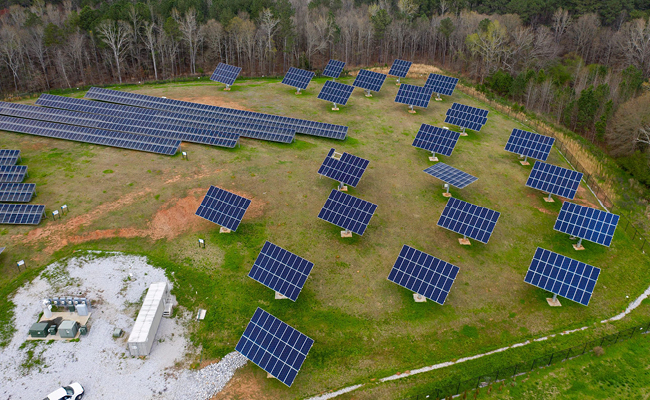 Renewable energy OK, but not too close to home

When it comes to transitioning from carbon-based to renewable source energy systems, Americans are on board. They’re less keen, however, having these new energy infrastructures—wind turbines or solar farms—built close to their homes, which creates hurdles for policymakers. That’s according to a study from University of Georgia researcher Thomas Lawrence.

Lawrence and an international team conducted surveys in the United States, Germany and Ireland to assess people’s attitudes about renewable energy technologies and their willingness to have the necessary infrastructures built nearby.

“People in Germany and Ireland were more open to having renewable energy technologies closer to where they lived, perhaps because they have less space than in the U.S.,” said Lawrence, professor of practice in the College of Engineering. “In the U.S., I was happily surprised to see overall support for a transition of power sources—especially to solar and wind—in the electrical grid, and it was stronger than I would have guessed.”

Respondents in each country were asked to evaluate five energy sources—wind turbines, solar power technology, and more traditional electrical power generation using biomass, coal or natural gas as the power source. They also were asked questions about what distance from their home would be acceptable for the corresponding infrastructure and these energy sources. (The surveys were conducted using the local unit system of the three countries—miles for the U.S. and kilometers for Ireland and Germany. Five kilometers is roughly 3 miles.)

Respondents in Ireland and the U.S. were less willing to accept biomass power technology in their immediate vicinity, with more than 70% choosing “greater than 5 km/miles” or “reject regardless of distance” options. German respondents were somewhat more accepting, with 55% accepting biomass at distances less than 5 km/miles from their homes. According to Lawrence, the U.S. result may be because people here do not understand “biomass power,” which is in essence burning biomass such as wood scraps to power a more traditional electrical generation facility.

A warmer response for renewable energy

Greater acceptance of renewable energy sources in Germany is not a surprise, according to Lawrence.

“Germany has been leading the charge in transitioning away from carbon-based energy sources,” he said. “Over 30% of their power right now is through wind or solar. People there are used to seeing wind farms and solar panels on rooftops.”

“Respondents in all three countries were generally more in favor of having renewable energy technologies close to their homes—unlike conventional energy technologies like coal and natural gas—but ‘close to my home’ was different in the U.S. than Europe,” Lawrence said. “Five miles was the cutoff, at least in the U.S. Once you get beyond that point, it’s out of sight, out of mind. People in Germany and Ireland often don’t have the luxury of five miles.”

This project was funded in part by the CREDENCE Project (Collaborative Research of Decentralisation, Electrification, Communications and Economics), a U.S.-Ireland Research and Development Partnership Program (centre to centre), funded by the Department for the Economy Northern Ireland (USI 110), Science Foundation Ireland (16/US-C2C/3290) and the National Science Foundation (0812121). Bertsch and Harold acknowledge funding from the ESRI’s Energy Policy Research Centre. The U.S. study was funded in part through a grant from Georgia Power/The Southern Company.

Study shows Georgia could cut its carbon footprint by 50%

Renewable energy OK, but not too close to home