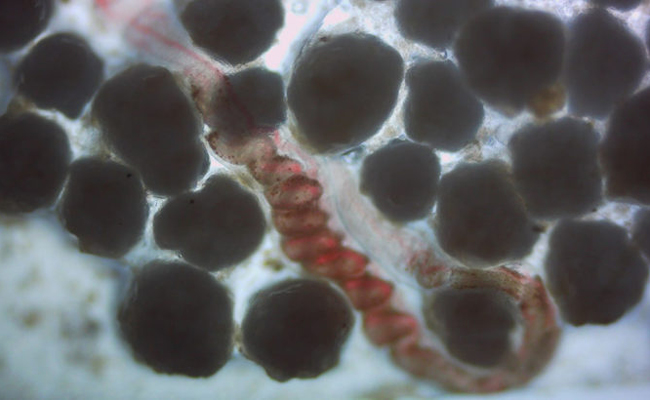 Manufacturers of single-use personal care items—like body washes, toothpastes, cosmetics and wipes—that have historically contained environmentally-persistent abrasives can utilize a new drop-in technology with confidence the new materials will biologically degrade in wastewater conditions, resulting in no micronized plastics. In a first-of-its kind study, research from the University of Georgia New Materials Institute demonstrates that cosmetic microbeads made from a naturally derived polymer—polyhydroxyalkanoates, or PHAs—developed by researchers at the Institute reached complete biological degradation in 15 weeks or less in municipal wastewater.

“Numerous and diverse types of invertebrates and microfauna were observed inhabiting the microbead environment, suggesting the PHA microbeads supported healthy microbial biomass production as organisms consumed the microbeads,” said Evan White, first author on the study and director of the Institute’s Bioseniatic℠ Laboratory. “Most of the carbon from the microbead metabolized to CO2, and some was converted into the bodies of organisms in this vibrant ecosystem which can be seen in supporting microscopy videos.”

A diverse ecosystem of microinvertebrates and -fauna was witnessed by researchers at the UGA New Materials Institute during recent field and laboratory studies to evaluate the degradation of cosmetic microbeads made from a polyhydroxyalkanoate, or PHA, polymer developed at the Institute. In the upper-right corner of this video, you can see a reddish-colored worm, or nematode. Smaller organisms are seen moving elsewhere within the microbeads and wastewater. As these organisms consume the carbon-based material, their digestive and metabolic processes degrade the microbeads ultimately into CO2. Microbeads in this study degraded in 15 weeks in laboratory conditions, and 13 weeks in field conditions, resulting in no micronized plastic particles. This video (magnified at 4X) was captured on day 62 of the respirometry studies conducted in the Bioseniatic℠ Laboratory.

Historically, personal care items made from environmentally-persistent materials have led to millions of micronized plastic particles escaping into the environment—daily—from wastewater reclamation facilities of varying age, technologies and filtration standards. This accumulation of plastic particles in sewage systems results in increased maintenance costs and system downtime, as well as costly capital improvements to wastewater infrastructure. Globally, the discharge of these micronized plastics into our streams and oceans has led to localized and regional bans on plastic microbeads, including in the United States in 2015.

In their study, the UGA-led research team said that PHA-based compostable materials are a better choice for manufacturers to use in products that are likely to end up in wastewater. Sewage sludge, said the authors, is naturally rich in microorganisms that have evolved to secrete enzymes that digest PHAs, a class of naturally derived polyesters.

The researchers used field and laboratory settings to compare the degradation rates of PHA microbeads, PHA films and polylactide (PLA) films to cellulose controls. Field testing was conducted in a controlled setting at an operational wastewater reclamation facility in Athens, Georgia, with samples withdrawn over 13 weeks during the spring of 2019. Pulled samples were analyzed by Raman microscopy and thermogravimetric analysis/mass spectroscopy (TGA/MS), combined with differential scanning calorimetry (DSC) to determine biological degradation outcomes of the microbeads. To validate results from the field testing, activated sludge from this facility was used as inoculum for controlled respirometry studies in the Institute’s Bioseniatic℠ Laboratory.

This is the first study to document biological degradation of PHAs in laboratory and field conditions using the final form of a product intended for commercial use. The microbeads tested are the first product tested to meet the Institute’s rigid Bioseniatic™ criteria, which includes respirometry to document microbial digestion; field degradation testing of the product; and absence of detectable micronized particles at the end of complete biological digestion in a respirometer, said White.

“Comparative Study of the Biological Degradation of Poly(3-Hydroxybutyrate-co-3-Hydroxyhexanoate) Microbeads in Municipal Wastewater in Environmental and Controlled Laboratory Conditions” was published by Environmental Science & Technology on Aug. 12, 2021. Co-authors on the study are Jessica Horn, Shunli Wang, Benjamin Crawford, Branson W. Ritchie, Daniel Carraway and Jason Locklin. RWDC Industries supplied the microbeads and PHA films. Funding for this work was provided by the RWDC Environmental Stewardship Foundation and the Walmart Foundation.