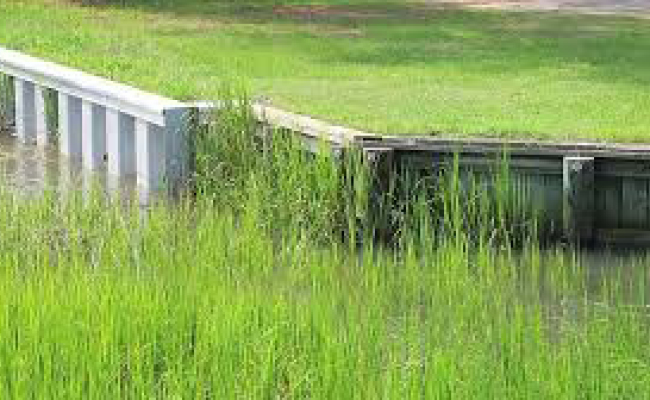 Between Sea-Level Rise and a Hard Place

Newly published research from the University of Georgia’s Institute for Resilient Infrastructure Systems (IRIS) sheds light on the practice of building hard armoring structures, such as bulkheads and revetments, along estuarine shorelines. While the negative ecological and economic consequences of shoreline armoring have garnered significant attention, the study provides new data on the extent of hard armoring and the reasons individual landowners turn to hard armoring.

The team's work was published Nov. 8 in the journal Nature Scientific Reports. The study was led by Craig Landry, a professor in UGA’s department of agricultural and applied economics, Brian Bledsoe, Director of IRIS and professor in the College of Engineering, Nicole Peterson, a graduate student in environmental engineering, and Clark Alexander, Director and professor at the Skidaway Institute of Oceanography.

People have long been drawn to the ocean, both for its natural beauty and economic opportunities. As development along the water has boomed, however, the natural systems that share the coast with humans are left with little space to thrive.

“In the 50s and 60s there was a lot of coastal development, but not a lot of appreciation for the long term impacts on the environment that development might cause. That, along with a tendency to install bulkheads, which are intended to protect property from erosion and storm damage, has led to concern about the ability of marshes to migrate as the sea level rises,” Landry explained.

Salt marshes, aside from providing habitat for numerous species, also provide services to the communities that surround them, including protecting the land from waves, reducing flooding, improving water quality, protecting shorelines from erosion, and serving as home for many economically important fish and crab species.

Georgia’s marshes account for a third of the salt marshes along the Atlantic coast, thanks to its tidal environment and relatively undeveloped shoreline. With both sea levels and development on the rise, the marshes, which require gently sloping shorelines and free sediment flow[BB1] , will be unable to migrate upwards if bulkheads and revetments are installed.

“Private protection can hurt the public good. If you take a naturally sloping coastline and you bulkhead it, the wetlands tend to die. When you put a seawall on a beach, you often lose the sand below it,” Landry said.

To prevent this issue in the future and help provide alternatives to homeowners looking to protect their homes from worsening storms, Landry and colleagues are examining the factors that have led to bulkhead installation. With specialties including economics, engineering and coastal geology, this interdisciplinary team was uniquely suited to tackle the question of why homeowners armor their shorelines from a new angle.

“From a behavioral and economic standpoint, we’re asking, ‘Why do they do this?’ ‘What are the factors that drive armoring of shorelines?’ Because if you understand why it’s happening you can predict when in the future it might happen again and create policies that help attenuate it,” Landry explained.

While several similar studies have used surveys to gather data about people’s perceptions and beliefs about shoreline armoring, the researchers wanted to avoid some of the pitfalls of using surveys. Instead, they used a census of all armoring along the coastline [BB2] and overlaid that with the property lines. Their hope was to explain the existence of bulkheads and revetments based on the natural and socioeconomic characteristics of the area.

“We wanted to know whether there were environmental factors forcing armoring. Are people more likely to put a bulkhead in when there are higher rates of erosion in their area? More powerful waves? If their property is more valuable?” Landry said.

The researchers found that there were several factors that strongly predicted when shoreline armoring would be used, particularly the slope of the shoreline and whether or not neighbors had installed bulkheads or revetments.

“Using this data, we developed a statistical model that accurately predicts how likely a piece of property is to have shoreline armoring based on environmental and socioeconomic factors,” Bledsoe said.

The model also suggested that as the sea level rises and communities along the shore continue to grow, shoreline hard armoring may increase and further impede salt marsh migration under sea level rise.

“We hope that by identifying the factors that increase the likelihood of property owners armoring their shoreline, we can create conditions that support alternatives to hard armoring, such as living shorelines,” Bledsoe said.

Living shorelines , which are stabilized shorelines made of natural materials, such as oyster shells and plants, may offer a place of refuge for salt marshes squeezed between sea-level rise and human development, while still offering the people and property behind them protection from erosion.

This research was supported by Georgia Sea Grant and the Wormsloe Institute for Environmental History. To learn more about IRIS and natural infrastructure, visit: https://iris.uga.edu