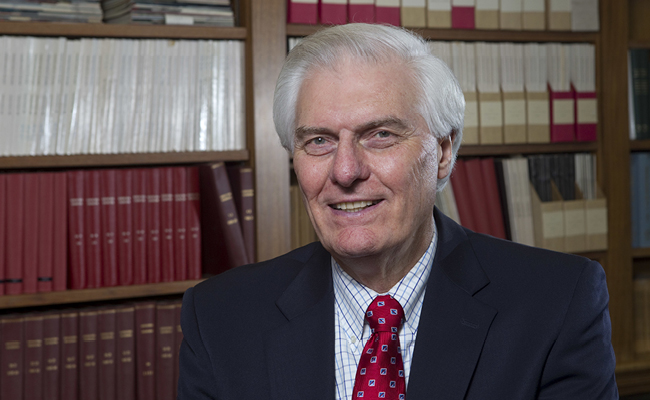 E. Dale Threadgill, who served as the founding dean of the University of Georgia College of Engineering, died Saturday at the age of 79.

Threadgill was instrumental in the movement to establish a comprehensive engineering program at UGA and served as interim dean of the new college from its establishment in 2012 until his retirement in 2013. An internationally recognized leader in the fields of agricultural engineering and biological engineering, Threadgill’s tenure at UGA spanned 38 years.

“Dale provided extraordinary service to advance the university and the state of Georgia,” said UGA President Jere W. Morehead. “We worked closely together on several initiatives throughout our careers, including the establishment of the College of Engineering when I served as provost. His exceptional leadership of the college will remain an important part of his legacy, and I will always remain grateful for his advice and friendship.”

Approaching the 10th anniversary of its creation, the College of Engineering is now the fourth largest college or school at UGA. Its enrollment has grown from approximately 400 students in 2012 to more than 2,500 today.

“It’s amazing that Dale worked so long and was so committed to establishing a comprehensive engineering college at the University of Georgia,” said Donald Leo, dean of the UGA College of Engineering. “It was a difficult journey and required patience and persistence over many years. Dale stayed the course, and we all owe him a debt of gratitude for his vision and leadership."

“Dale believed there was student demand for a comprehensive engineering program at UGA, and he was confident there was demand for more engineering talent in the state. On both counts, the trajectory of our college and the success of our graduates have proven him correct,” said Leo.

A native of Elmore County, Alabama, Threadgill attended Auburn University, receiving a bachelor’s degree in agricultural engineering in 1964 and a Ph.D. in engineering in 1968. He was a member of the faculty of Mississippi State University from 1968 to 1975, where he taught and conducted research in biological engineering.

Threadgill joined the University of Georgia as a faculty member in 1975. He became head of the department of biological and agricultural engineering in 1987 when the department was part of the College of Agricultural and Environmental Sciences. In 2001, Threadgill assumed additional responsibilities when he was named the first director of the Faculty of Engineering, a new multidisciplinary engineering unit at UGA.

During his career, Threadgill served in several leadership roles in professional societies, including two terms on the board of directors of the American Society of Agricultural Engineers. In addition, he served as coordinator of the Georgia Environmental Technology Consortium, a division of the Georgia Research Alliance, from 1990 to 1998. Active in leadership development, Threadgill served as an adviser to Leadership Georgia, the oldest statewide leadership development organization in the U.S., from 1985 until his death.

Engineering student is inspired to teach