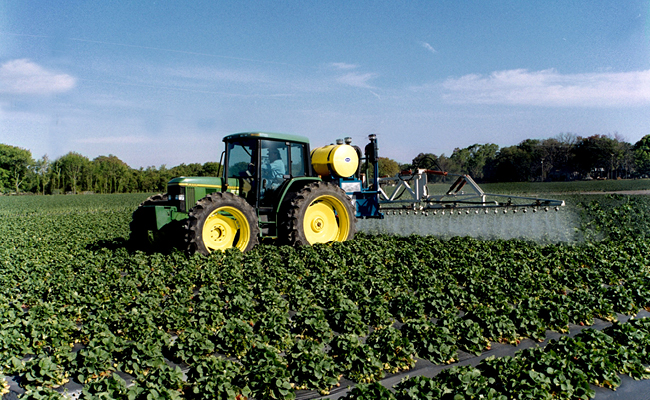 From agriculture to COVID disinfection, technology developed at UGA continues to serve

COVID-19 safety protocols often invoke images of workers in personal protective gear, donning backpacks with sprayer attachments that douse the environment for sanitization and disinfection. People may be surprised to learn that the specific spraying technology has long been used in other ways — for other pandemics, agricultural purposes, and commercial spray tans — and was developed at the University of Georgia.

This air-assisted, induction-charged (AAIC) electrostatic sprayer works by passing the disinfectant liquid through a nozzle, which creates highly charged droplets that can wrap around and coat surfaces. The AAIC technology, first developed in the 1960s and refined at UGA during the last few decades, has found extended life in several wide-ranging applications. It played a role in surface decontamination for combating the swine flu pandemic, has been deployed as a rapid skin-decontamination countermeasure against bioterrorism incidents, and provides an effective way to sanitize surfaces in food-processing plants. The secret lies in the physics, where electrostatic forces cause droplets to move against the natural gravitational force and adhere to target surfaces, even “wrapping-around” the sides and hidden surfaces.

“Anytime you need to control airborne particulates, whether pathogens or air-pollution dust emissions from coal-combustion power plants or pesticide sprays or even toner particles in xerographic copiers and droplets in inkjet printers, you turn to electrostatic forces and engineering,” said S. Edward Law, D.W. Brooks Distinguished Professor Emeritus in UGA’s College of Engineering.

Law and graduate students in the Applied Electrostatics Laboratory at the Driftmier Engineering Center adapted the technology for commercial use. The patented technology was licensed by the UGA Research Foundation to industry partners for domestic and international use generating royalties of nearly $1 million before the patents expired.

“It’s been satisfying to see the physics get embodied into safe and reliable electrostatics products that can be put to meaningful use,” he said. “It’s only useful to humanity if we can transfer the technology to the public. That’s the fun of the engineering process. It’s also one of the three missions of our land grant college — service to the citizens of Georgia.” 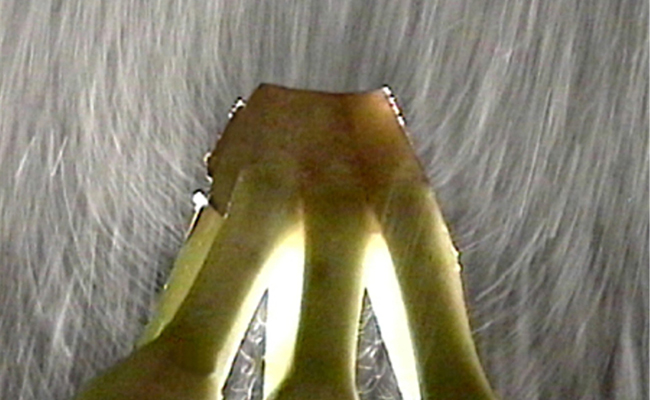 Highly-charged droplets wrap around and coat the surface of a bunch of bananas.

Law was a graduate student in biological and agricultural engineering when he first read Rachel Carson’s groundbreaking 1962 book Silent Spring, which documented the adverse environmental effects caused by the indiscriminate overuse of chemical pesticides. Under the direction of Henry Bowen at North Carolina State University, Law saw an opportunity to develop a more efficient application method for agricultural pesticides, which would combat environmental pollution. Based on the science, farmers could dispense 50% less chemicals with electrostatic sprayers and still achieve the same pest-control results.

After attaining industrial electrostatics experience, Law brought this mission with him as he began researching and teaching at UGA in 1970. Under grant support from Cotton Incorporated, the initial AAIC patent was issued in 1977, and graduate student Mike Lane (MS ’78) took the licensing to a major farm machinery and chemical company for commercialization.

Under additional grant support from the Environmental Protection Agency, future graduate student Ken Giles (MS ’81) conducted a large-scale, multi-year field testing of 12-row electrostatic-sprayer machines at UGA’s Coastal Plain Experiment Station in 1979. Extensive pest-control results confirmed that half-rate electrostatic applications could control cotton insect pests as well as full-rate conventional sprayers. After completing his master’s thesis research, Giles joined the engineering faculty at the University of California at Davis, where he conducted additional evaluations of the AAIC electrostatic spraying technology on California strawberries and greenhouse crops. Once again, the efficacy of half-rate electrostatics applications was documented, and the two universities continued to collaborate on research.

At UGA, Law challenged students to use electrostatics to control small dust particles and spray droplets in a variety of applications. In a memorable and often-cited example, he’d utilize a small, portable electrostatics “duster” to demonstrate the difference in deposition onto an apple with conventional uncharged versus electrostatically-charged particulates in a pressurized can of foot powder.

“The first uncharged spray would put a dot of powder on the forward-facing side of the apple, and then the electrostatic spray would turn the apple completely white and coat it on all sides,” said Steve Cooper, who became one of Law’s graduate students in the mid-1980s. “It looked like a magic trick.”

As the research collaborations continued, Law and Cooper focused on the electrostatic nozzle itself to improve reliability, which Cooper later licensed through his Athens-based company, Electrostatic Spraying Systems. Law and Cooper developed newer and more reliable AAIC-based electrostatics nozzles, which led to additional breakthroughs and patents for greenhouses, crops and vineyards. In the early 2000s, Cooper designed and sub-licensed the machinery for Mystic Tan, a popular nationwide franchise that began to take over the trend from UV-hazardous tanning beds.

“This created an industry that wasn’t there. Now millions of people get spray tans every year, and it saves them from skin damage,” Cooper said. “The great electrostatics effects prevent people from looking streaky or orange. It looks like you just came back from the beach.”

Around the same time, ByoPlanet International, a manufacturer of electrostatic spray equipment, had developed a spray for cruise ship disinfection and contacted Cooper to create a more efficient and effective solution. Cooper worked with the company on additional disinfection projects during the next decade around Ebola, listeria, salmonella and even bed bugs — and then the COVID-19 pandemic appeared at the end of 2019. ByoPlanet is now investing $7 million this year into expanding its Georgia manufacturing operations and bringing 250 jobs in manufacturing, engineering and management to the Athens area.

In addition, Electrostatic Spraying Systems, Inc. based in Watkinsville and now owned by Bruce Whiting, has worked with new industries that had never considered mass disinfection spraying before, including schools, churches, salons and gyms.

“Last year was an extremely busy year trying to meet the demand of COVID while keeping my employees safe to work,” Whiting said. “This year is stacking up to be very different. The pandemic is easing up but many, including schools, government and military, are coming up with long-term disinfection protocols.”

Industries are seeking more uses for the AAIC electrostatic spraying technology, Whiting said, particularly in nursing homes, public transportation such as school buses, and extended hospital settings such as ambulances. Electrostatics is also blossoming in “sister technologies” in other fields that require spray coatings and electrically-charged particles.

Law, for instance, is currently working on a NASA-funded project at the Kennedy Space Center that could allow food crops to grow on the International Space Station. When gravity is at a minimum, scientists need to determine how to use aeroponics — rather than soil or hydroponics — to infuse water and nutrients into a plant’s root system.

Though Law formally retired in 2006, he remains active as a part-time engineering faculty member who supports a number of electrostatics-focused research projects. Still ever present in his mind is the life-long calling instilled by Silent Spring and Prof. Bowen to reduce environmental pollution and the chemical pesticides used in farming practices.

“We have to acknowledge that there’s a better way,” Law said. “Safe and effective electrostatic spraying can make a significant difference for environmental and human health issues, and we need to move forward incorporating it in America’s agricultural industry. Currently, over 60-70% of electrostatic pesticide-sprayer machines are marketed outside the U.S.”