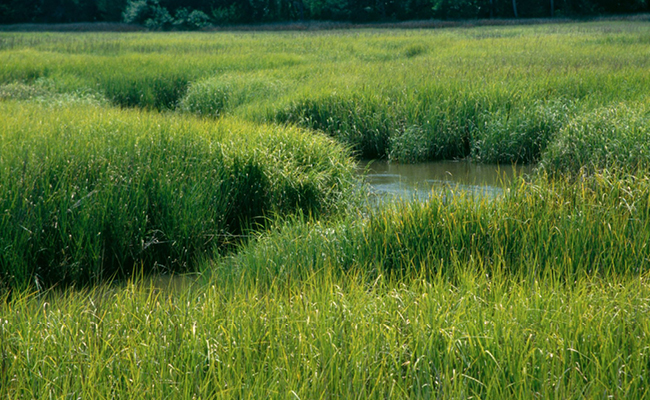 How much is a salt marsh worth? That’s one of the questions the University of Georgia and The Nature Conservancy will try to answer as they launch a pilot study funded by Georgia Sea Grant to determine the socioeconomic value of salt marsh ecosystems in Georgia.

Experts estimate that 70 percent of all salt marshes have already been lost across the eastern seaboard, largely due to human development. Sea level rise from climate change also threatens their continued existence.

“These marshes are among the most well-preserved and extensive natural coastal networks in the nation, playing an indispensable role within human communities and for wildlife,” said Matthew Bilskie, an assistant professor in the School of Environmental, Civil, Agricultural and Mechanical Engineering at UGA’s College of Engineering. “Who stands to benefit from insuring such natural infrastructure so that if the marshes suffer damage, they can be restored? And who should pay for this insurance?”

Answering these questions will take a network of its own. There’s Bilskie, a coastal modeler and head of the UGA Coastal Ocean Analysis and Simulation Team (COAST), a research group with expertise in computational modeling coastal and estuarine systems. His team is working on modeling how events such as hurricanes could affect Georgia’s salt marshes. This data will be passed to Yukiko Hashida, an assistant professor of agriculture and applied economics in UGA’s College of Agricultural and Environmental Sciences. Her task will entail monetizing Bilskie’s projections. Does it make economic sense to introduce an insurance scheme into nature? If yes, what costs should be included—and what communities need to be at the planning table?

“We are very excited about this effort,” said Mark Risse, director of UGA Marine Extension and Georgia Sea Grant. “Sea level rise is threatening Georgia's expansive salt marshes, which filter pollutants from our waterways, mitigate flooding, and provide habitat for commercially valuable fish and shellfish. Through this work, we hope to help the public better understand why it’s critical to protect and conserve our coastal ecosystems and develop mechanisms to conserve and protect them.”

The Nature Conservancy (TNC) will invite community stakeholders into the pilot, including representatives from the insurance and reinsurance industries. Together, they’ll ask what kind of innovative financing mechanisms might help incentivize the protection and restoration of the marshes. The hope is that a collaborative analysis of Georgia’s salt marshes and their multiple benefits could introduce insurance as a real option for protecting these resources in the future.

“If the pilot succeeds, this type of business and environmental collaboration could potentially be replicated across the South Atlantic,” said Ashby Worley, TNC’s coastal climate adaptation director in Georgia.

Economist Hashida is eager to dive into the project for its urgency and because there’s nothing else quite like it underway in the region.

“There are studies looking at the interaction between wetlands and storm damage, but she says nothing else is bringing the insurance modeling directly into it,” she says. “And nobody else is tying it directly into implementable actions. That’s exciting to me.”

Bilskie adds that finger pointing—looking for someone to blame when these resources sustain damage—isn’t productive at this moment in the global climate crisis.

“Show results with science,” he said. “Show how these marshes help human communities and how it would benefit everyone’s bottom line to save them. That’s what we’re trying to achieve.”