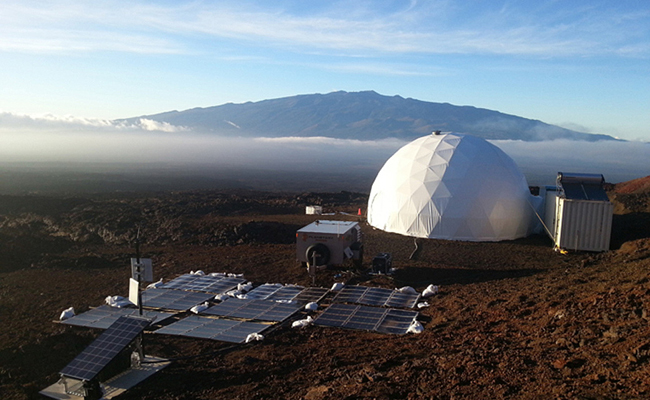 A University of Georgia College of Engineering graduate is leading a NASA-funded project to study human behavior in long-term space exploration, including a potential voyage to Mars by the 2030s.

James Bevington, who earned a master's degree in environmental engineering from UGA, is one of six scientist who have spent the past eight months isolated in a geodesic dome on Hawaii's remote Mauna Loa volcano. The study will assess the psychological difficulties associated with living in isolated and confined conditions for an extended time. Prevision HI-SEAS (Hawaii Space Exploration Analog and Simulation) missions have focused on food requirements and crew cohesion.

► Watch our interview with James Bevington from HI-SEAS

"This whole project is really to study the psychological aspects of what it would be like to live on Mars in isolation," said Bevington. "The landscapes here are very barren and mostly lava fields like you would expect to find on Mars."

The team has had no no physical contact with people in the outside world and has worked with a 20-minute delay in communications, the time it would take for an email to reach Earth from Mars. The crew wears space suits whenever they leave the compound to conduct daily tasks such as geological and mapping studies.

In addition to Bevington, the team members include engineers, a computer scientist, a doctoral candidate and a biomedical expert.